Understanding the angles of the build plate rails

Understanding the angles of the build plate rails

I'm just trying to change some parts of the build to use my "180°C build chamber-compatible" components, and I've noticed that the Hevort rails aren't arranged at the same angle.

The green parts are the rails I plan to use, evenly arranged at 120° to each other. 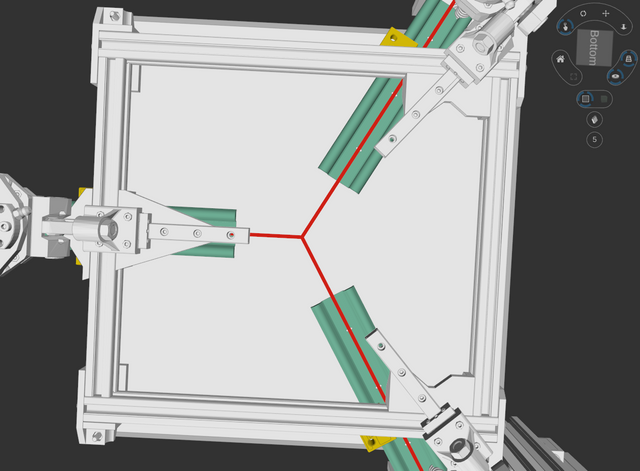 To my understanding, the angles between the lines of movement and the distances between the sliders need to be equal, otherwise, the tilt angle of the bed won't be correct.
Here's a comparison picture with an exaggerated difference to clarify what I mean: 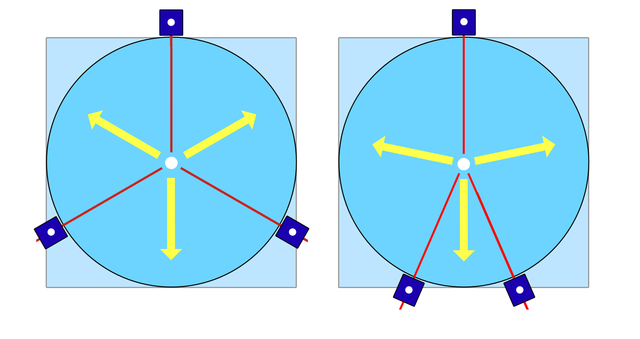 I admit that the correct positions of the sliders look strange on a square bed: (without any helplines)

They appear shifted, but they aren't.

I can't think of how Hevort's setup should be able to do a proper 3d movement. Which is a requirement for non-planar printing. (which Hevort is cited to be capable of)

The placement of the z-rails is relatively unimportant since they only do the lifting and lowering on a fixed plane. Think of "grabbing" the slider from either the left or right - it doesn't make any difference, because it's just up and down which works from any spot. (as long as there's no bending involved) But the center points of the sliders are critical.

Lifting or lowering any of these 3 spots by the same amount should lead to the same amount of tilt, which is only the case if they're equally arranged around a center point. Think of Delta printers. If the angles or rod lengths are unequal by just a little bit, the print will be warped or unparallel to the bed and fail. Is this a design error or a massive thinking error on my side?

Re: Understanding the angles of the build plate rails

It's all a question of mathematics. Even with this angles you are able to calculate (and reach) every position. An equally arrangment from center point isn't necessary, as long you have to define the spindle points in the firmware. I.e. in klipper: [z_tilt] z_positions

https://www.klipper3d.org/Config_Refere ... h=z#z_tilt
Crazy is he who does crazy things. Or get married.
...
Damned. I'm doubly crazy.

Re: Understanding the angles of the build plate rails

dagolard wrote: ↑
Wed Aug 03, 2022 5:59 am
It's all a question of mathematics. Even with this angles you are able to calculate (and reach) every position. An equally arrangment from center point isn't necessary, as long you have to define the spindle points in the firmware. I.e. in klipper: [z_tilt] z_positions

Yes, I see. But you still have different resolutions for the movement which isn't ideal. Lifting points that are closer to the center or to each other require fewer steps for the same tilt angle, which means that the positioning accuracy/resolution of the tilt angle is varying. This could result in visible patterns on non-planar printed parts. I just can't see any good reason to not use equal angles & distances. Or any downside to doing it.
Top
Post Reply
3 posts • Page 1 of 1