Nice progress, Lede, great to see this coming along. Been a while since your first post about those OMC steppers, haha. I am sure they will be fine, my bed requires a fair bit of push to get it to back-drive the ball-screws, my cat jumped on it the other day and it stays put….

Beano wrote: ↑
Thu Jul 22, 2021 10:05 pm
Nice progress, Lede, great to see this coming along. Been a while since your first post about those OMC steppers, haha. I am sure they will be fine, my bed requires a fair bit of push to get it to back-drive the ball-screws, my cat jumped on it the other day and it stays put….

Yeah last night I started to connect the bed plate to the z-axis. I am now storing all my extra parts on the bed which way close to 15+ pounds and it is holding solid. I think it is more the ball screws that provide the stability because rotating them around is easy but when applying weight to the bed it seems very solid. Unfortunately some of my printed parts broke while I was trying to assemble the gantry so have to wait till they get reprinted. still other parts of the printer to work on while these are printing.

I'll try and get an update post of my progress, the printer is starting to look more and more like a printer.
Top

Been working on this some this week and here is where I'm at so far. Still waiting for some small parts to arrive but at least it looks like a printer now.

This is a close up of the bed. The ball bearings keeps falling out of the wobble wings so I order some new ones that should be magnetic.

And here is a shot of the full assembly so far. No electronics have been added yet other then the mounting of the nema steppers. I know there are some yellow parts, ran out of purple again so instead of waiting for more I just used what I had. Once this printer is fully up and running I plan on changing out a lot of the printed parts with a stinger filament. 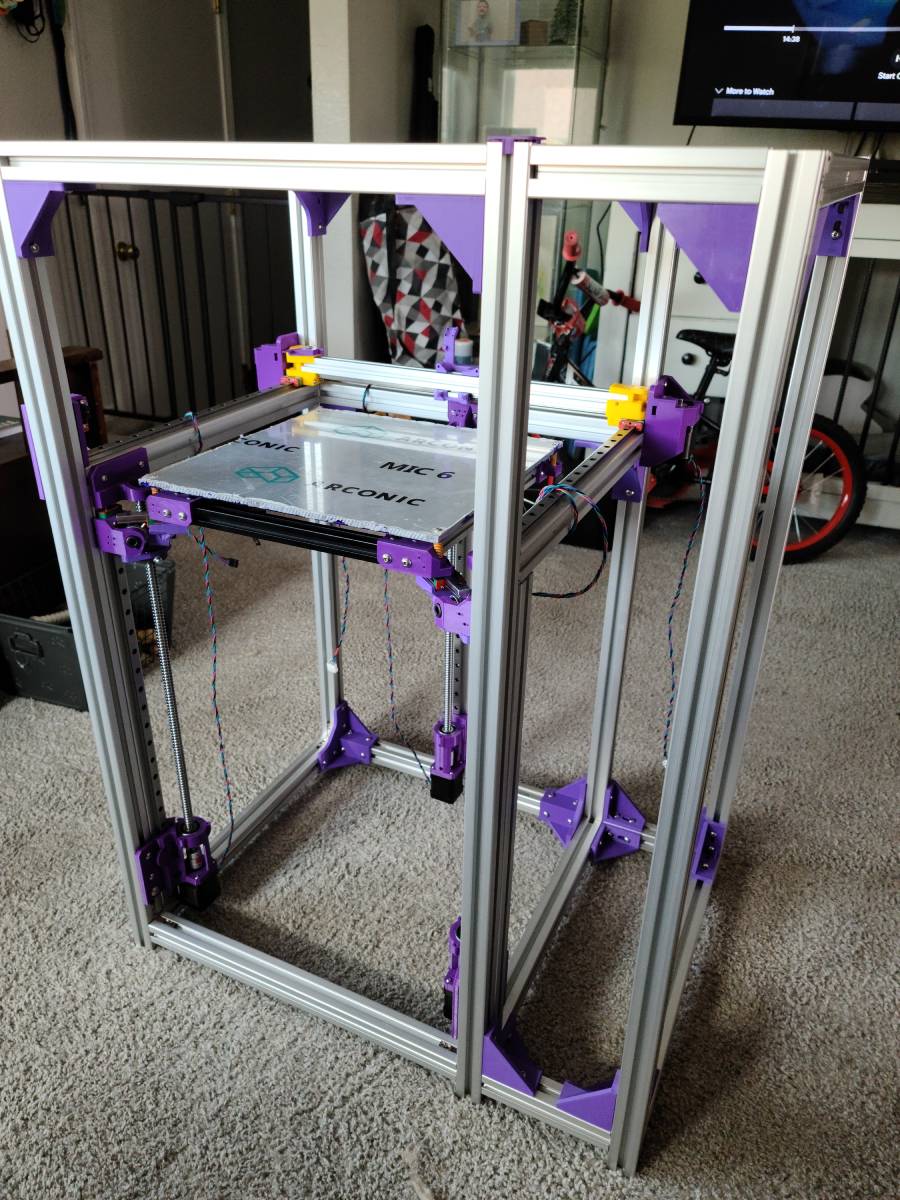 Still working on firming up the brackets so the 3030 is more stable. Once I'm done with that not sure what next to tackle.

Things still to do:
Doesn't look that long of a list but every step in that list is going to be a struggle I think. It has been fun though assembling the printer and now that the bed is attached is fun just to move the ball screws up and down and watch it move. I might just try and connect the electronics for a quick test and try to get all the configuration setup to move everything. Anyway that is my update for now, thanks everyone for you suggesting it has helped me progress in this build.
Top

It's Alive! Finally after getting the belts attached I couldn't resist but to try and hook as much as I have together up to the Duet 3 board and try my luck with making some movement. Here is the video proof this thing can move:

As you can see it does finally move on its own power. Had to make some changes to the config to finally get it to home on both the x and y axis. Two problems I'm trying to sort out are the y endstop for some reason wouldn't register with just the purple plastic it was printed in so it would try and over run the y axis every time I tried to home it. Finally fixed it by placing a little bit of black electrical tape on it and now it registers the endstop properly. The other oddity which I must of done something wrong is the X axis seems to be reversed. I had to set it at the high end instead of zero to get movement. Not sure if this will come back to haunt me later when I actually try to print something.

I did have some fun and tried changing the speed from 100% to 300% and it seemed to run fine with no belt slips.

Now just waiting for a crimping tool and some wire so I can extend the stepper wires since most of them will not reach the control center yet.

Next on my semi short list is to start working on the attaching the Mosquito hot end to the HextrudeORT system.
Top

Small update today. I've switch to using the EVA-3D print head for my printer since it has most of the parts I need to make my Mosquito hot end and BondTech extruder work together. I really like how the EVA-3D head is a modular in design with several different options for the hot end or extrude and is a mix and match type design. While trying to convert my printer over to the new head I broke the left y bracket because one of my M5 screws got cross threaded. That is why we can print more parts.

Here is my head assembled off the printer so far. Everything is on it except for the build touch sensor. Either I have the wrong sensor or where I'm suppose to mount it isn't right. Will need to do more research or just build my own bracket.

Here is the assembled head so far: 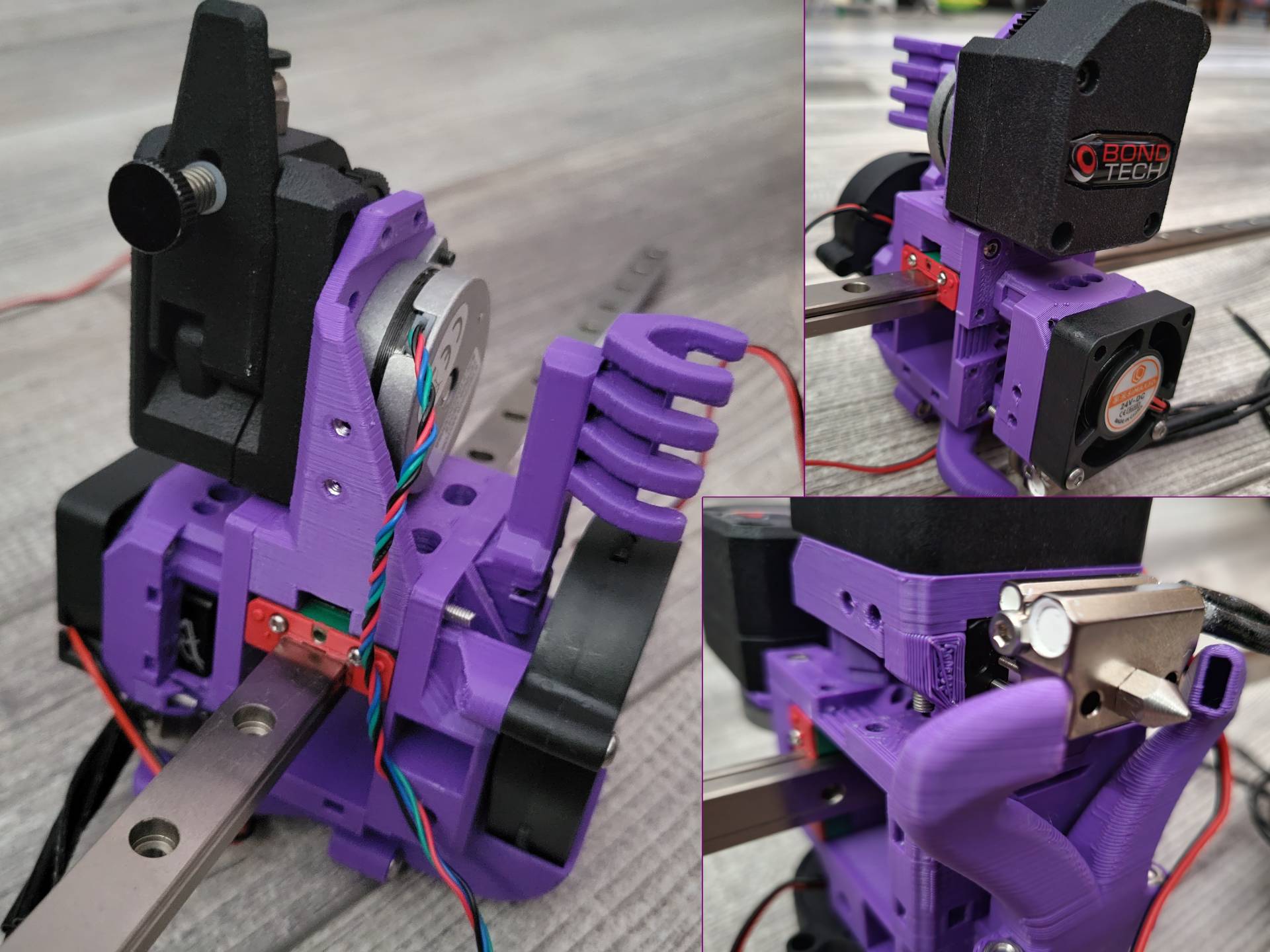 Love the purple! Is that a Nema14? how does it mount to the BMG? Looks like it might share Nema17 mounting points? How is it for power when printing at speed?
Top

Thanks Jhonno! Currently my CR-10 can't print the Nylon-CF filaments so I have just been printing everything in PLA+ until I can get this machine working. Once this is up and running I plan on re-printing a lot of parts with a stronger filament.

As for the print head, I haven't done a test print yet. Still working on the front and back plates so they align up with the XY gantry belts. It is a Nema 14 which I've not hooked up yet because I don't want to burn it out, it can only take 0.5 amps. I think I got the duet 3 properly configured but it's one of those things where I want to check 100 times before burning up a stepper motor. The Neva 14 is smaller but I might have to swap it out with the Nema 17 so I can make sure I get the config properly setup then move back to the 14. The mount holes do align up so there is little to no hardware modifications needed.

My goal is to make the new universal plate and back plate fully compatible with the EVA-3D project parts. Once I'm done I'll try and figure out how to post the parts for others to use.
Top

Yeah I would definitely print it all in a better material.. I nearly ruined PLA in a dehydrator it is that bad at heat. Not good with UV either!

Shame you can't keep the Purple. I love Fiberlogy PA12-CF15.. I print it on my CR-10. I want to get into straight nylon too, but think I need the doors on my HevORT etc for that.

I'm intrigued with the NEMA14 and the BMG.. They aren't expensive, I may try. A good way to cut 300g off the print head!
Top
Post Reply
23 posts

Return to “The Show Room”